Ryan Veatch, developer of StoneBridge Promenade, wanted to throw a grand party to mark the official opening of his upscale business and retail center in North Liberty.

“We wanted to make a big splash and introduce the community to all the fine tenants in the development with the goal that the introduction would help grow the businesses,” explains Veatch, Doctor of Optometry and owner of StoneBridge anchor business Blink Vision. He wanted it to be a fun, family-friendly event that would help him make connections and demonstrate his commitment to the community. To realize his ambitious goals, Veatch turned to FUEL to help plan and promote the event.The FUEL team worked with Veatch to develop branding for the event — called “Discover Something Grand” — and generated awareness and anticipation using social media, thematically-related posters for each StoneBridge tenant, event banners, and tabletop displays. 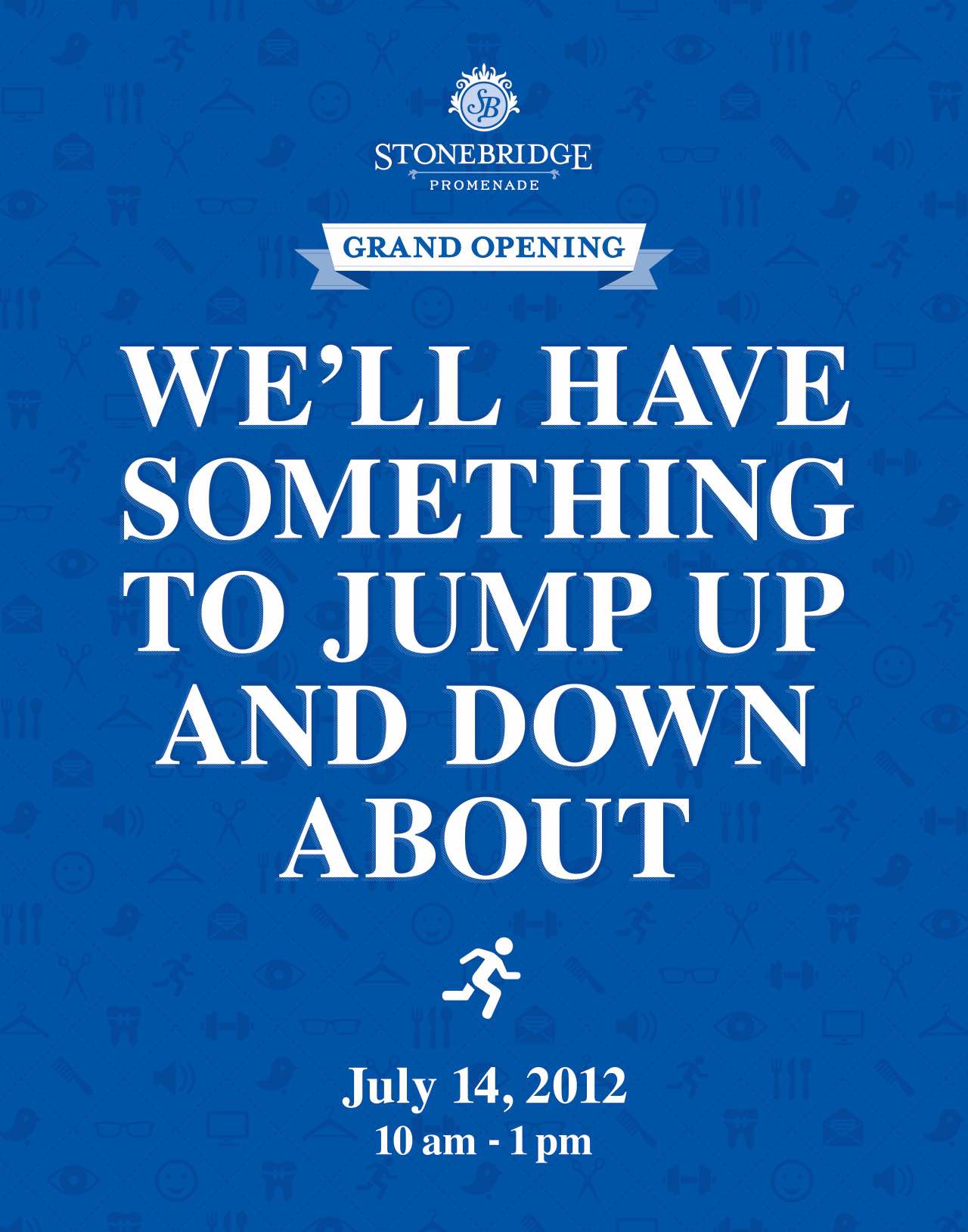 FUEL also collaborated with event planner Diane Hung to organize a rich schedule of activities. Highlights included air ambulance helicopters from local hospitals, a professional face painter and bouncy house for the kids, performances by a world-class juggler, free ice cream, food from the Bluebird Diner, door prize drawings, and giveaways from each business. A radio station broadcast via live remote from the event.

“FUEL did everything from suggesting and booking entertainment to producing a closely knit, clever marketing campaign both internally and externally to the media,” says Veatch. “They kept a sense of consistency and intentionality so that everything had a purpose down to the littlest detail.”

Hung says FUEL provided clear identity and direction for the event. “Our goal was to plan a day that would give people a really good taste of all the different tenants and what they had to offer,” she says. “We wanted the people of North Liberty and the surrounding community to see that StoneBridge would be a tremendous resource for the entire family.”

Drawing more than 1,000 attendees on a bright summer Saturday, the event surpassed expectations for Veatch, his tenants and those who came to the party. “People were really impressed and a little blown away,” he says. “It was all so very well-thought out and well-produced. Several of the tenants made comments that people said, ‘We didn’t know you were here before this.’ They got a lot of new exposure done in a highly professional way. I have seen my business grow as a result.”“It was absolutely fabulous,” says Hung. “If you didn’t know what this development was about before, you really knew by the end of three hours.”

Veatch says he had another way to evaluate the grand opening. “It was so successful that by the end of the day I had pretty much lost my voice from talking to so many people.”

Bill Bollman is FUEL’s Creative Director. Before co-founding FUEL in 2001, he worked for Horizon Communications, JW Morton and Basler Design Group. Bill studied Illustration at Hawkeye Tech in Waterloo, Iowa. An expert in the “old ways” of hands-on print production, these skills influence his work in the digital world to this day. His work throughout his career has been featured in international publications including Graphis, How International Design, Communication Arts, and The One Book as well as numerous design annuals and reference books.